This month, we’ll focus on how you can get your brain (and your students’ brains) to work better. There are countless ways we could go about this process, but since it’s the beginning of a new year, we’ll focus on what contributes to us feeling happy, smarter and even losing weight. Best of all, every one of these insights are free!

In a moment, I’ll share some of the brain-based insights in human behavior. There are just TWO (out of 50+) brain chemicals that do 90% of the work in your brain. These two are the “uppers and downers.” These two must have a poor PR agent, since most educators don’t know much about them or how important they are. They are named glutamate and GABA (gaba aminobutyric acid).

New research is now exploring how GABA (a “downer”), in certain formulations, may be helpful in treatments for those with anxiety or anger issues because GABA dampens brain activity. Glutamate (an “upper”) may become, in certain formulations, an intervention for those with Fragile X syndrome, retardation and autism to support brain function. Can you influence GABA levels? Of course; every time you drink alcohol, it raises GABA levels and inhibits brain activity.

Can you influence glutamate levels? Sure; it’s present in mushrooms, parmesan cheese, tomatoes, oysters, sweet potatoes, carrots, and of course, MSG. But let’s narrow our focus to explore four much more practical brain chemicals that you can affect fairly easily.

The first of our “top four” brain chemicals (that we can influence) is the neurotransmitter serotonin.

It is produced in the brain from the amino acid tryptophan. Serotonin is the everyday “feeling just fine” regulator. If you don’t feel pretty good most days, you may have too little serotonin available. Too little serotonin is linked with depression and too much gives you an altered universe (the effects of LSD). Serotonin is present at highest concentrations in the gastrointestinal tract. If you’ve ever had a “gut feeling” about something, serotonin was responsible. Lesser amounts are produced in the brain. Females have higher baselines of serotonin, but the levels vary more than they do in males.

Serotonin serves as an agent that supports the production of new brain cells, and that’s good. We lose cognitive and behavioral flexibility when serotonin is low. Higher serotonin is associated with stability, greater popularity, being liked, and even religiosity. There’s new evidence for a surprising role serotonin plays in reward processing.

Impairment in the serotonergic system has been linked to humans making action choices that are less advantageous in the long run. This neurotransmitter regulates the time scale of linking punishments to past actions. The upside gain for a classroom is that when it’s released, students are more pleasant, they pay attention and are more social. I’ll show you how you can regulate serotonin in a minute.

The second of our “top four” brain chemicals is dopamine; commonly known as the neurotransmitter of pleasure.

But a better way to understand it is that when our brain predicts pleasure (winning a bet, getting a favorite food, online novelty, planning a purchase, a romantic moment, a drug, etc.) dopamine rises. Once the pleasure has been experienced, dopamine goes down. That’s why, even if we made a good choice, many of us fee badly shortly afterwards.

The initiation of the action (such as ordering a new weight loss product online, ordering French fries, buying a new outfit or the anticipation of eating a Cinnabon®) creates the “woo-hoo” anticipation of pleasure. Once the actual product has arrived or the experience is happening, we might feel guilty, remorseful or worried about what has to happen next to “fix” the mistake we just made. This chemical is produced in the brain from tyrosine (an amino acid).

Higher levels of dopamine (and noradrenaline) are present during the “falling in love” time. Dopamine generally supports cognitive function, especially decision-making, impulsivity and working memory. Hang on; I’ll show you how you can regulate it in a moment.

The third of our “top four” brain chemicals is cortisol (remember it by the sound, “Uh-oh”.)

It’s released from the adrenal glands. We usually associate the hormone cortisol with stress, but like dopamine, it’s the prediction of discomfort or any negative outcome that can raise our cortisol levels. During the event, we might be neutral or even excited. But the prediction of adversity bumps up our cortisol. It’s the body’s way of prepping for surviving.

Cortisol enhances the body’s supply of energy so you can handle adversity. When you don’t take the action to use the newly-created energy to deal with the stressor (as your body expected you to), the extra energy gets stored as…fat. In the classroom (as in life), a little cortisol going up and down all day is a good thing.

You sometimes do have cortisol (predict adversity) and dopamine (anticipation of pleasure) at the same time. How? Go to a theme park and you may experience (temporarily) mixed feelings on one of the high-speed thrill rides. Risk plus fun equals positive memories. The upside gain for a classroom is that when released in small to moderate levels, students remember more and have more energy. In short, you’ll want to manage your own stress levels as well as those of your students. Be patient. I’ll show you how you can influence cortisol in a moment.

The final of our “top four” brain chemicals is norepinephrine (also known as noradrenaline.)

This chemical acts as a hormone within the body (it’s released from our peripheral nerve endings) and acts as a neurotransmitter within the brain. Norepinephrine affects many areas of the brain, such as the amygdala, which can influence where we direct attention.

Norepinephrine also underlies the fight, flight, or freeze response by directly increasing heart rate, triggering the release of glucose from energy stores, increasing blood flow and boosting the brain’s oxygen supply. It is triggered by urgency, risk and excitement. Being in love increases norepinephrine (more focus, more intensity and strong memories.) The upside gain for a classroom is that, when released, students tend to have a more narrowed focus (less distractive) and enhanced memory for learning.

Let’s “flesh out” each of the chemicals listed above and learn how you can promote smarter brain chemistry. In no particular order, here they are:

Serotonin can be raised by friendships, while dopamine goes up for very special people, like a loved one. In the classroom build relationships, build community and provide everyone with some moderate levels of status. Familiar music, teams and classroom rituals promote serotonin. Serotonin can be stabilized by physical activity and increased through classroom safety.

Dopamine can be enhanced by positive predictions. “Hey kids, I’ve got an idea. This will be good! How about if we all try this experiment…” Dopamine can be bumped up by successes (e.g. problem solving, task completions, resource acquisition). Success, gaining on a goal, or winning boosts dopamine. Voluntary gross motor movement can boost it too. Quick games, recess, energizers and relays can bump this up.

Cortisol can be raised by creating uncertainty (“Oh no; what will we do?”), by raising accountability (“Oops; our quiz is tomorrow. I forgot to tell you earlier.”) or by creating a negative prediction (“Don’t know if we have enough of these for everybody.”) You can also raise cortisol with mild failures, confusion or uncertain changes.

Now, the primary message here may be obscured by all the content. Here’s the key takeaway: our brain and body’s chemicals influence our lives and you have something to do with the student’s brain chemistry (as well as your own).

Embrace the difference you can make. Help your students have a fabulous day, every day!

Your partner in learning, 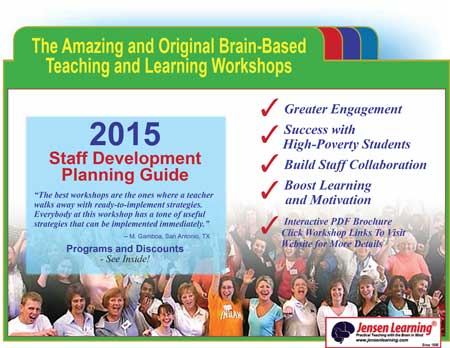 Get The Strategies
Over Half of all Teachers Make These 2 Mistakes. A lesson in ENTHUSIASM
Scroll to top